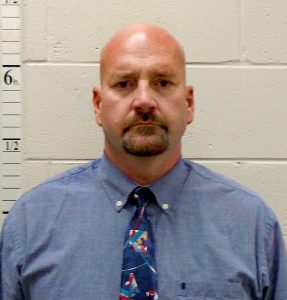 Christopher Young, local Peabody-Burns teachers, was engaged in sexual relations with two students for months, giving gifts such as promise rings to them, and spending the night with them in his trailer, according to an affidavit released this afternoon.

Police were first notified that Christopher Young, 45, was engaged in what was called a consensual sexual relationship with a student in January by a close friend of the student. Chief Burke, who received the tip immediately launched an investigation into the matter with cooperation from the Peabody-Burns School Administration and the Marion County Sheriffs Office.

The Peabody-Burns administration was able to use its video system to identify inappropriate behavior from Young.

“Multiple times school administration has found Chris Young’s classroom door locked prior to school starting in the mornings and Chris Young and the [student] have been in the classroom together,” said the affidavit.

According to the police source, the relationship had been going on for months, with Young providing the student’s gifts, and the students often spending the night in his trailer.

After a search warrant was issued on Young and the student’s phone, nude of the students as well as text messages that further indicated the supposed relationship.

“…I’m fucking my History teacher and the head cheerleader at this school, my dad’s the head drug dealer and moonshine maker of the town so I’ve got it all made,” One message on the student’s phone said.

While initially during the investigation the students were unwilling to be interviewed, one of the students eventually agreed. The student claimed that she and the other female had engaged in sexual activities with Young on the 28th and 29th of January.

No Arrest warrant has been issued as of the release of the Affidavit.

Peabody-Burns social studies teacher Chris Young snuck into a student’s bedroom and spent the night on numerous occasions according to an affidavit released today. It is also said that his family knew about the sexual relationship going on between him and this student.

The school administration looked through surveillance videos and found inappropriate behavior between Young and one of his students. These acts include being locked in his classroom together before school began, sneaking off into an alcove during school, and the student repeatedly showing up at Young’s classroom when she should have been elsewhere.

After gaining a search warrant police found inappropriate pictures involving the underage students on both Young and the student’s cell phones. One of the students confirmed that the photographs were of her and the other student.

This student also said that both students engaged in sexual acts with their teacher on January 28th and 29th, 2018.

Young has been charged with eight felonies for sexual misconduct involving minors and he will have a preliminary hearing on April 6th.

-Look into how the pictures got onto Young’s phone

An affidavit released today details the alleged sexual misconduct between Christopher Young, a 45-year-old teacher and coach at Peabody-Burns High School, and a female student starting in late 2017.

Young and the student, according to the documents, engaged in what she described as a “consensual” relationship for several months. Young even gave the student a “promise ring.”

Peabody-Burns High School administration reported that they had also observed suspicious behavior on school grounds by Young, including surveillance video of him with the student in a hallway alcove during class time. The student was also observed alone with Young in his locked classroom before school hours.

Young and the student would spend nights in his trailer and meet in his workshop. Young would even sneak into her home at night through her window.

Police were informed of the relationship when a close friend of victim came forward to Bruce Burke, Chief of Police.

Young’s family, a wife and two children, allegedly knew of the misconduct. Friends and family of the victims were also aware of the relationship and expressed concern.

Following the report, a search warrant was executed for both Young and the student’s phones. Police found explicit photos and text messages detailing the affair, along with evidence of the involvement of another female student including “threesomes.”

Young was charged with eight felonies for unlawful sexual relations with minors. His preliminary hearing is scheduled for April 6th.

According to an affidavit released today, the family of a student was aware of the relationship she was having a with a high school teacher.

Christopher Young, 45, was a social studies teacher at Peabody-burns High School when he was found having a relationship with a student romantically beginning in December of 2017.

Both Young and the student tried to hide their relationship, but friends and family eventually found out. Those who knew about the two attempted to convince them to end it, knowing that it was not right, but the relationship continued on. Young has a family of his own, a wife and two children.

The two spent many nights in Youngs’ trailer, and there were times where he would sneak into her house late at night.

This relationship came to light when a close friend of the student came forward to Chief of Police Bruce Burke.

The High School Administration reported that they observed unusual behaviour from Young who would have his classroom door locked before school hours, and the student was inside of the class with him. Surveillance footage also showed him in the hallway while he had classes going on, and disappearing into an alcove of a hallway during school hours with the student.

Both the Peabody Police Department and Marion County Sheriff’s office executed a search warrant for Young’s cellphone. A warrant for the students’ cellphone followed. Both phones contained nude photos and other explicit content.

The students’ phone contained messages about details of her relationship with Young and another female student.

There was also a second female student Young had a relationship with. This student decided to come forward and agreed to be seen by a sexual assault nurse examiner and response team.

Young was charged with eight felonies for unlawful sexual relations and exploitation of minors.

Who and how many other students were involved with Young and the Student?

More info about why the family didn’t take further measures to stop this relationship.

Was it the student that was having a relationship with the other the one that came forward about the relationship?

What did Youngs family have to do or say about this relationship?

Information on  an extensive and reportedly “consensual” relationship between Peabody-Burns High School teacher Chris Young and a student was released in an Affidavit today.

Young and one of the students had a close relationship since at least December of 2017, according to the affidavit. The two referred to each other as boyfriend and girlfriend and Young had recently given the student a promise ring.

Police received information on Young’s misconduct from a concerned friend of the student, who had previously received a phone call from the student asking to lie about her whereabouts while she slept at Young’s house.

Surveillance records found patterns of suspicious behavior between Young and the student during school hours. School officials identified multiple instances of the two being alone in tucked away hallway areas and Young’s locked classroom.

Police also confiscated both Young and the student’s cell phones, which were found to contain sexually explicit messages and photographs.

The student’s father, whom she claimed is the “head drug dealer and moonshine maker in the town” in a text message, told police he did not want his daughter’s information used in the case and that Young “needs to lose his job, his marriage, and maybe do some jail time, but not 20 years.”

The father also rebuked police requests to place his daughter in protective custody.

Photographs of a second student engaging in sexual acts with Young were also found on his phone. The student agreed to a sexual assault exam which found evidence of intercourse between her and Young.

n affidavit released today revealed that the family of a student had been aware of her relationship with her high school teacher. The teacher had been sneaking in and out of the student’s room through the bedroom window.

Christopher Young, 45, social studies teacher at Peabody-Burns High School, was charged with eight felonies for alleged sexual offenses with two 16-year-old students earlier in the year. He surrendered to court on Mar. 5.

Young and one of the students had been engaging in sexual activities since Dec. 2017. Several of their friends and family had known about the relationship and attempted to convince them out of it.

The two had been referring to each other as “boyfriend” and “girlfriend.” Young, who is married with children, had also told his family that he was seeing someone else.

Chief of Police Bruce Burke was informed of the sexual relations between the two by a close acquaintance of the student.

High school administration also reported suspicious behavior, such as finding Young’s classroom door locked before class. Surveillance systems throughout the school showed the student repeatedly entering Young’s classroom during other class times and the two disappearing into an alcove in the hallway.

Nude photos and explicit text messages were found on both cell phones.

In a text message found on the student’s phone, she talked about her sexual relations with her teacher and another female student. She also mentioned her father.

“My dad’s the head drug dealer and moonshine maker of the town so I’ve got it all made,” she added.

The student’s father told Burke that his daughter did have feelings for Young at the time. He wanted Young to lose his job and marriage and “maybe do some jail time, but not 20 years.”

The student’s sister stated that the student “has mental issues” and “is keeping all this bottled up inside of her.” Her sister had told her that during the multiple times she slept with Young, they had sometimes engaged with another student.

The other student is the second victim of Young’s sexual offenses. Explicit photos of this student were also identified on the cell phones during the investigation. The student agreed to cooperate with a Sexual Assault Nurse Examiner/Sexual Assault Response Team (SANE/SART) for an examination.

Young’s preliminary hearing is on Apr. 16.